There are some things I can see being angry about if they came early. A dentist appointment, for instance… or a physics exam. Things like these require a certain amount of preparation and mental fortitude; a need to harden your heart just the slightest bit, even. Honestly, I’d be pretty upset if I walked in to class one day and my professor said “Guess what! Your final has been moved from 2 months from today to… Today. Good luck.” Just the thought fills me with a sort of stomach sinking dread, and I can almost imagine turning to the kid next to me and spitting out a biting and unsolicited tirade.

“Can you believe this crap?” I might grumble. “Every year they move the final up earlier and earlier. Before you know it, the final’s going to be on the first day of class.”

Thankfully, this doesn’t happen. Finals are pretty consistently situated toward the very end of the quarter, and no matter how much it might seem like it comes faster every year, it doesn’t. And it never will.

I’m not sure why anyone would feel the need to be angry at Christmas, but there’s definitely a discernible amount of bitterness toward the holiday. Especially this time of year when Thanksgiving has yet to pass, and Target’s been selling fake Douglas Firs for two months already.

Anger’s fine, though. It may leave me a bit puzzled, but who am I to look inside someone’s soul and tell them that what they think is hatred toward Christmas is really just a way to hide the fact that they’re mourning their lost childhood? I’m no one. However, I don’t particularly want to hear about it. I especially don’t want to be told that, in getting in to the spirit, I’m feeding in to some kind of corporate commercialistic gang bang. Because that’s just inappropriate. As it is, though, everyone has an opinion.

Today a man said to me “Happy Not-Thanksgiving-Because-It-Doesn’t-Matter-Anymore-Since-Christmas-Decorations-Are-Already-Up-Holidays!”

He really said that.

I kind of “heh”d in an effort at humoring him, but I’m not completely sure I was able to keep the confusion from showing on my face. Was his comment necessary? Did he absolutely need me to know that a few twinkle lights and snowman stickers had the power to ruin his day? I don’t know. Maybe that’s the case, but if it is, it doesn’t make a lot of sense to me. Firstly, I don’t think that putting my tree up in November is going to lessen Thanksgiving for me or anyone else. I’m still going to spend time with my family. I’m still going to eat an impossibly large meal that I have no business having dessert after. My sister’s still going to suggest holding hands at the table and taking turns saying what we’re thankful for, and my dad, for reasons unknown to me, is still going to think that it’s an excellent idea. Walmart displaying advent calendars in November, October, or even July isn’t going to change that.

In any case, I have some doubts as to whether or not maintaining the sanctity of Thanksgiving even has anything to do with some people’s strange attitude toward the most festive holiday of the year. The other day I heard a woman actually claim to “hate” Christmas. When the person she was addressing responded with “Oh, well, I don’t hate Christmas. I just don’t see why it has to be pushed down our throats so early in the year”, she back pedaled a bit.

That right there is a really popular sentiment masquerading as radical. In other words, people like to think that it makes them seem cool or edgy to look with scorn upon something as harmless as having a flat screen TV advertised more aggressively in the newspaper, but it’s actually incredibly commonplace. It doesn’t take a genius to see that Starbucks is going to try to sell you a gift card this time of year. It does, however, take someone with real independence of thought to be able to look past all that and form their own opinion. If you don’t like commercialism, find a unique way to celebrate, and let other people enjoy their tree and hallmark cards. No one can force you to do it their way, so there’s really no sense in “bah humbugging” your way through the season.

And anyway, when it comes down to it, who doesn’t like getting gifts? You might say you don’t (I’m looking at you, Mom), but you do. Everyone does. Most people like giving them as well, because surprise! It feels good. So, I mean, I honestly don’t see a problem with a day centered around people giving other people things. Unless you’re a character in a Nicholas Hornby novel, you have no excuse to disdain christmas with the kind of raw enthusiasm that I’ve been seeing as of late.

So, this Thanksgiving, I want you to sit back and relax with a big plate of turkey and stuffing, and sing Jingle Bells louder than anyone else in the room. Or don’t… but at least smile.

A little cheer never killed anyone. 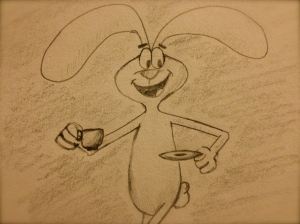 You know, it occurs to me that I never found the time to grow out of the things I loved as a child. I say “never found the time”, because it seems to me that a lot of people make a special kind of effort to leave their childhood behind. I’ve seen a lot of little girls get to a point where they don’t want to wear pink because it’s “too girly”, or they don’t want to wear shirts with care bears on them anymore, because Care Bears are… Well, I can’t blame them for that. Care Bears are scary. Putting that aside, I hope my point is clear. As we get older, through television, the media, our culture, etc… we are talked out of loving the things we love.

In fact, I have to feel a bit sorry for people who were pressured in to giving up their beloved hobbies/interests before they had a job and therefore money to explore that hobby to its real and full potential. When I was little, I was obsessed with tea parties and the beautiful dresses women wore in times long passed. Now that I have the funds, I throw elaborate tea parties (sometimes for gaming events, but mostly for no reason at all), and am able to buy museum quality replicas of antebellum attire. You can judge me if you like, and you can call it a waste of time and money, but someone once said that time you enjoy wasting is not wasted… And I agree emphatically.

I’m lucky that I ended up in a circle of friends, including Dan, who seem to understand my stance. I’ve been asked more than a few times if Dan’s heavy video gaming bothers me, usually followed by a statement a long the lines of “it would drive me crazy.” I mean, I get it. I do understand why people can’t, or don’t think they would be able to, handle a significant other immersing themselves in a hobby that takes so much of their time. Me? I’m solitary by nature, so his long bouts of PC gaming would never bother me for that reason. After I give that answer, however, people go on to the next question: “But… I mean, games are for kids, aren’t they?”

If enjoying what you love is for kids, then give Dan and me a bowl of Trix.

… Get it? Because Trix are for kids. Selfish sociopathic kids who can’t spare one measly box for that poor pathetic rabbit who, from the looks of it, is one scheme away from landing himself in a men’s correctional facility. General Mills knows what it’s like to still have their childhood interests close to heart. Either that, or they might possibly be trying to make a point about the potential hazards of drug addiction, but I digress.

There’s nothing wrong with doing whatever you want with your free time, or your life. I feel like we’re supposed to believe that if you don’t wear the right things, or if you spend Friday nights inside reading or watching TV, you’ve messed up somewhere along the way. We’re supposed to go out and spend time with people that we probably don’t even really like that much just so that when someone asks us what we did over the weekend we can give them an interesting answer. How did that ever become a measure of self-worth? No one should feel bad for not enjoying what everyone else does, and no one should feel bad for enjoying what everyone else doesn’t. Unless it’s illegal and egregiously immoral, but I’m not here to preach. In any case, I believe this spills over in to other facets of life. People don’t wear what they want to wear, they don’t say what they want to say, and they don’t do what they want to do. Everyone’s so terrified of being judged or not fitting in, that they’ll do just about anything to avoid it.

What’s really troubling, is a paranoid idea I have that a lot of people just want everyone else to like and do the same things as them, except they don’t want anyone else to be as good at it. People don’t like when a heavy girl wears clothes that don’t flatter her, because… why? Because it hurts them to have to look at her? No. It’s because, in a way, they begrudge her the confidence it takes to put herself out there like that. Confidence, that maybe, they don’t possess themselves, and therefore can’t understand in anyone else. It confuses and annoys people, and so they feel like it’s necessary to tear her apart… When, really, that kind of confidence is amazing. The older I get, the more I think that the people who actively dislike others for being different from them really just can’t stand the fact that someone is better at something than they are. Otherwise, I’m convinced, they just wouldn’t care.

Basically it’s like your mom and dad always said: If people don’t like you, it’s probably because they’re jealous.

Either that or you’re kind of a jerk and might need to work on your personality a little. Even then, though… Maybe it’s more important to be yourself than to mindlessly be nice to people when you don’t want to be. I don’t think that radically, but I can still see the logic.

In the end, who cares what anyone else thinks? Who cares what everyone else does? Don’t dance like no one is watching; dance like everyone is. The only person you have to be with 100% of the time is yourself, and if you like you and the things you do… no one else should matter.

So, pour yourself a cup of tea and bowl of Trix, beat Half-Life 2 on Expert, and live life on Awesome.

The Latest in Fall Blogging